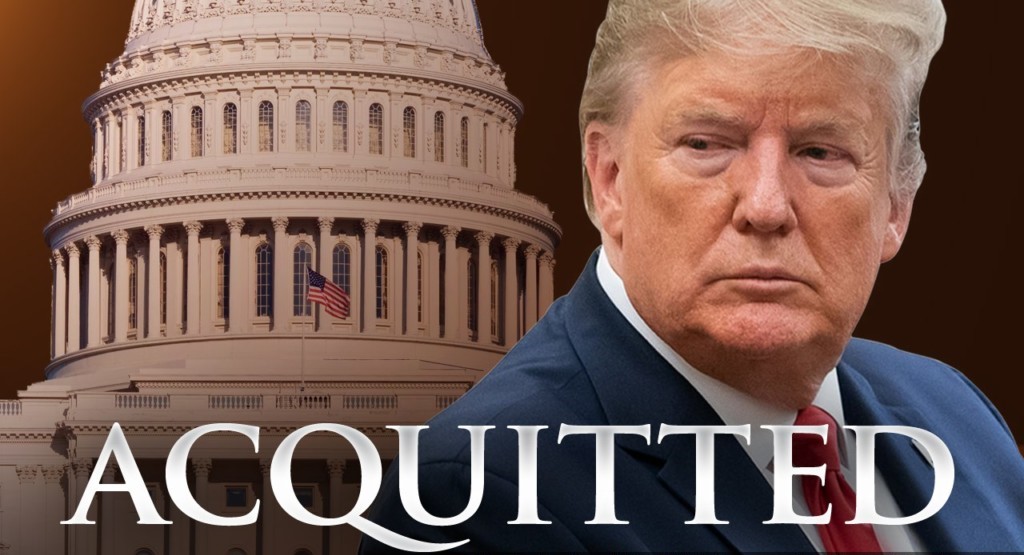 “Former” President Donald J. Trump was acquitted in the 2nd attempt by Congress to impeach him. The Senate voted 57 – 43 to convict Trump but that fell short of the required 2/3rd votes required to impeach.

Trump has issued a statement thanking all of his supporters, some 75 million of them, stating this:

“Our cherished Constitutional Republic was founded on the impartial rule of law, the indispensable safeguard for our liberties, our rights and our freedoms. It is a sad commentary on our times that one political party in America is given a free pass to denigrate the rule of law, defame law enforcement, cheer mobs, excuse rioters, and transform justice into a tool of political vengeance, and persecute, blacklist, cancel and suppress all people and viewpoints with whom or which they disagree.”

As many have suspected, all this time, the corrupt politicians in Congress attempted to doctor evidence in an effort to prove their case, which was completely frivolous from the start. In any other court, their conduct would have been cause for contempt and perjury, both of which are considered significant crimes that are punishable by fines AND jail time.

A great day in America where the patriots have won this battle and will continue to do in the near future.

Here’s a final quote from President Trump’s statement to the press today:

“Our historic, patriotic and beautiful movement to Make America Great Again has only just begun. In the months ahead I have much to share with you, and I look forward to continuing our incredible journey together to achieve American greatness for all of our people. There has never been anything like it!“

Love and light to you all!