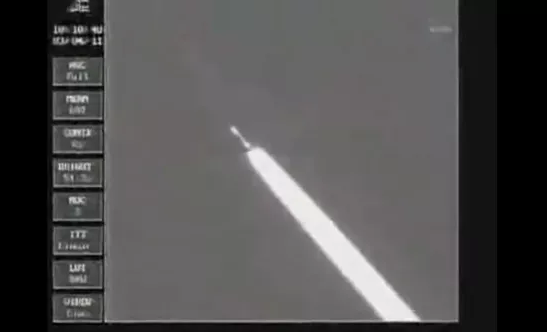 Today in the news (March 4, 2011), I came across an article about the failed launch of a NASA “global warming satellite” today from Vandenberg AFB, California. The Taurus XL rocket blasted off at 2 AM local time and several minutes later, plummeted, with payload on board, into the Pacific ocean. (http://www.msnbc.msn.com/id/41895904/ns/technology_and_science-space/)

The media and NASA claimed that the satellite that was being launched was a global warming research satellite. Something tells me that’s not what it really was but was instead a Star Wars¹ satellite weapons system most likely being deployed by the dark.  Let me tell you why:

The satellite was launched from Vandenberg AFB.  Although a primary NASA launch facility, it is highly suspicious when you consider SaLuSa’s message to us on March 2nd, 2011.  SaLuSa states:

“I am SaLuSa from Sirius, and wish to assure you that the Galactic Federation are well aware of the dangers in Space placed there in opposition to us. However, we are not desirous of starting a Space War, and in fact it would be out of the question. We can deal safely deal with all attempts to engage us, and we shall also ensure that weapons are not turned against you.”

When I read that last paragraph of SaLuSa’s message this past Wednesday, I was kind of taken back by it.  It seemed very out of place to say considering the rest of the message but I think it was on purpose, to catch our attention.  And that’s precisely what it did for me.

But how could I assume that the seemingly routine launch of research satellite could actually be something as sinister as a space weapon?  Well, for starters, this isn’t the first time they have attempted to launch a satellite like this (back in 2009, see MSNBC article above).  On top of that, Vandenberg AFB is home to the 30th Space Wing of the US Air Force Space Command.  In addition, it is home to the western launch and test range (WLTR), where they test the Minuteman III intercontinental ballistic missle (ICBM).  And just recently, Vandenberg AFB has taken on a new responsibility with the creation of the Joint Functional Component Command for Space (JFCC SPACE)².

Perhaps I’m reading too much into this but my instincts tell me otherwise. This was clearly an attempt by SaLuSa to give us some proof as to battle that is happening behind the scenes between the light and dark.  SaLuSa is giving us a clear indication as to what the Galactic Federation is doing to put a stop to the dark’s end game tactics.

So, if you didn’t believe it before, here’s a reason to start believing. This is really going down people and our time has finally arrived. Rejoice in that fact and let the light permeate in and thru you, without hesitation, doubt, or fear.

Footnotes:
¹ Star Wars is a reference to the Strategic Defense Initiative (SDI), created in 1983 by U.S. president Ronald Reagan. It was to use ground and space-based systems to thwart attacks by other countries deploying nuclear ballistic missiles against the U.S.