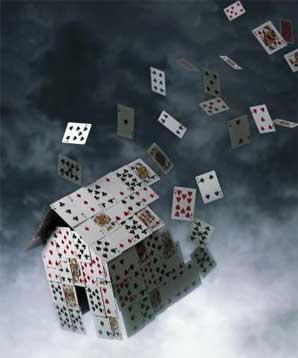 The markets tumbled world-wide, affecting every major economy in the world.  The European markets took a substantial hit, losing over 3% overall and the Euro hitting an all-time 8 ½ year low against the Yen and a 4 year low against the US Dollar.  Asian markets also fell amidst fears of a major global downturn and the rising tension on the Korean peninsula.

So, how will this all affect us and what does it all mean?  For starters, the global economy is collapsing as has been prophesized.  The old system of economy does not work and never did, unless of course you were one of the ones profiting from it.  But the fact remains that it’s broken and cannot be fixed.

The US deficit alone has far surpassed a point of no return.  That means that even if every single American pitched in everything they owned and saved to pay off the deficit, it still wouldn’t be enough to pay it off.  So basically, it cannot be paid back anymore and the US has defaulted on all debts owed.  In other words, the US is bankrupt.

The house of cards if finally coming down and it’s the best thing that could happen to us all.  There is nothing to be scared of because for the first time in our Earth’s history, we are witnessing the collapse of the most provocative and lucrative economy known to man, designed solely to keep the rich richer and keep the poor poorer.  In addition, this means that a new economy will rise in its place – an economy that makes sense and works for EVERYONE…not just the rich.

You really don’t need to take my word for it.  The truth speaks for itself and there is no denying that the world markets are collapsing…right in front of your eyes.  We were told this was going to happen and that 2010 would be the year of truth.  Well now you can see it happen instead of believing it’s going to happen.  And this is only the beginning and this year will knock your socks off!

2010 will not only be the year of truth but it will become perhaps the most important piece of history in human evolution.  This year will be the one year that changed humanity forever and ushered in the leap of human evolution that no one ever dreamed was possible.

The Golden Age is here!